✪ The rapturous advance praise for Cherise Wolas’ assured meta debut, The Resurrection of Joan Ashby, doesn’t do it justice. This ambitious first novel introduces us to an elusive artist with a stratospheric cult following—only to unravel her life, as the blessings of divine inspiration battle the curse of earthly love. Lawyer and film producer Wolas has forged an audacious balancing act whose betrayals come from the least expected corners, submerging readers in a dazzling universe we hate to leave. -Huffington Post, Sept 9, 2017

“The case for novelist Cherise Wolas’s profoundly gorgeous and humane debut cannot be overstated. For its provocative meditations on artistry and domesticity, our Kirkus critic in an enthusiastic starred review likens The Resurrection of Joan Ashby to Lauren Groff’s Fates & Furies and John Irving’s The World According to Garp. I’d add Siri Hustvedt’s The Blazing World and Hanya Yanagihara’s A Little Life, while stressing Wolas’ style and story are all her own. What [she has] achieved in this novel...is a tour de force. And while I accept that it is a debut, I am shocked by it. It's...the literary equivalent of Athena springing fully formed from the head of Zeus.”
—Megan Labrise, Kirkus Reviews' Fully Booked podcast, Interview


“The Resurrection of Joan Ashby is a stunning debut—because there is nothing debut about it. It arrives so fully realized that it stuns as it entertains, as it twirls the reader on the sharp point of a #2 pencil. Wolas is a writer in full command of some impressive powers—one might even call them special powers. There is a joyous embrace to her work—to her exploration of the life and mind of her main character, the author Joan Ashby. Ashby is so well rendered that I found myself jealous of her (and Wolas) and also wishing she were my best friend and that we had a standing drinks date. Wolas is singular in her voice—and yet the delicacy, the specificity reminds me of my most favorite authors: J.D. Salinger, Carson McCullers, Truman Capote, Joan Didion.”
—A.M. Homes, NYT  bestselling author of May We Be Forgiven,
winner of the Women's Prize for Fiction (now the Bailey's Prize)


“Cherise Wolas has delivered an audacious and dynamic first novel. The Resurrection of Joan Ashby is a remarkable tapestry of literary skill, emotional insight, and sensational storytelling.”
—Ivy Pochoda, author of Visitation Street


“This is the kind of book that pulls you under and you go willingly. And when it's over, you come up for air and see anew. In giving us the story of one woman's struggle to write her own life, Wolas captures worlds in worlds here, and lives in lives. As many currents run in a single river, The Resurrection of Joan Ashby is rich and wide, and deep.”
—Sarah Blake, NYT bestselling author of The Postmistress


Cherise Wolas' impressive debut will have readers enthralled from the first revealing page all the way through to a betrayal of epic proportions. Stunning.”
--Excelsior Bay Books


“The Resurrection of Joan Ashby...delivers an epic, intense, unforgettable picture of an enormously talented writer whose life doesn't go according to plan. Wolas' prose is stunning, and the novel's structure—Joan's stories are layered upon the main narrative—is as much a part of the story as the writing itself. Absolutely lovely.”
—Phoenix Books


“...a narrative tour-de-force...Cherise Wolas...will leave us waiting breathlessly for the next masterpiece.
—Turnrow Books


“I am in complete awe and love with Joan Ashby. Never have I read a book so ravenously. She has cut me into pieces and then mended my heart.”
—Valerie Koehler, Blue Willow Bookshop, Houston, TX


“By age 25, Joan Ashby is a literary sensation. Marriage and motherhood, however, alter the course of her writing career. The Resurrection of Joan Ashby portrays a complicated character with deeply conflicting feelings about her role. Embedded throughout the novel are Joan’s own short stories that display both her literary genius, and her own deepest desires. Cherise Wolas’ impressive debut will have readers enthralled from the first revealing page all the way through to a betrayal of epic proportions. Stunning.”
—Pamela Klinger-Horn, Excelsior Bay Books, Excelsior, MN


This masterfully written novel explores what it means to be a woman, what it means to be serious about a career, and what it means to lose yourself through the best of intentions.  The story is also rich in intimate betrayal, forgiveness and self-redemption. There are so many important questions raised by this brilliant novel, it is a perfect book club selection.  An intelligent story about a strong woman that I enjoyed immensely.
—Deon Stonehouse, Sunriver Books & Music, Sunriver, OR 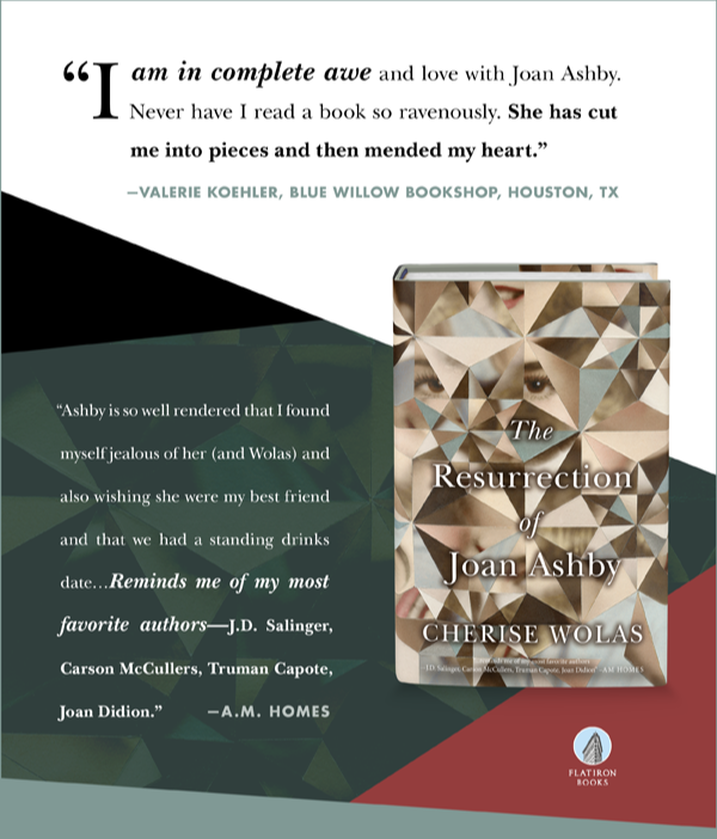 “The Resurrection of Joan Ashby is that rarest of things . . . a big, bold kaleidoscope of a novel that dares to tackle the big themes of family—identity, love and betrayal—with heart, humor and honesty. It is an astonishingly accomplished, surefooted debut; novels like this one make careers.”
—Craig Waters, Macmillan Sales Representative


“One of my favorite things in the world is to discover a ‘new’ writer that knocks my socks off. Cherise Wolas is one of those writers. She has the depth of thought and sensitivity of heart to portray a panoply of wildly varying characters in their own light, much to the reader’s delight and ultimate satisfaction. The sidebar stories captured within the novel are as intriguing as the main story of Joan’s life.”
—Ellen Pyle, Macmillan Sales Representative


“In my 34 years of selling books for Macmillan Publishers, rarely have I come across a debut this accomplished . . . It’s a privilege to be selling. My advice to reading groups adopting this epic family saga is to keep lots of chilled white wine on hand. Your meeting for this story will resemble everything from a literary salon to group therapy.”
—Reed Oros, Macmillan Sales Representative


“I always hesitate when I’m tempted to use a lot of superlatives when talking about a book with a buyer. Using superlatives with a buyer is like giving sugar to a diabetic; if you go too far the damage can be catastrophic. Even so, I have to say it has been a long time since I have read such a masterful work of fiction. That it is a debut novel boggles the mind.”
—Jim Riggs, Macmillan Sales Representative


“You will devour the main narrative spanning thirty years or more and be delighted with the stories within the story. This is a lavish multi-course meal that should be savored and shared. I dare you to put this down and not want more.”
—Donald O’Connor, Macmillan Senior Field Sales & National Account Manager